The human whose name is written in this note shall die.

2 Mins read
2
0
Share
Japanese Animes rocks and this is yet another proof of it. Death Note is a brilliant crime investigation anime with a twisting plot. I watched it a few months back, and was thinking all these days to post about it, and today its done 🙂
SPOILER ALERT: Following texts might reveal important twists in the story 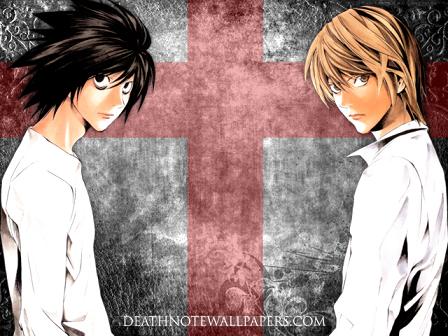 Plot:
The story revolves around an abnormally brilliant japanese student, Light Yagami(aka Kira), who finds a notebook (DeathNote) that poses the power to kill people. Light Yagami is tired of this corrupted world, where there is no justice. I have to say here that Light Yagami’s sense of justice matches exactly mine and I started searching for Death Note myself after watching this anime 😛

So, with the Death Note he is trying to create a perfect new world, by eliminating all those people who dont live a honest life. But he is cornered and threatened by the world’s greatest detective, L. The anime beautifully explains the battle between those greatest minds on earth.

L:
He is the best character in this anime with the aliases Hideki Ryuga, Ryuzaki and many more. But no one knows his original name. L is the representation of Justice, symbol of Intelligence and a brilliant character. He easily became one of my favorite anime character.

About the death of L, though its logically perfect for L to die at such situation, I couldn’t stand it. Even I started to hate watching the episodes after the death of L, but I finished watching it for the sake of finishing it.

Ryuk:
Ryuk is the Shinigami who dropped the Death Note in human world and came after it to the human world for some fun. He is a very expressive character and funny character. I like him too. 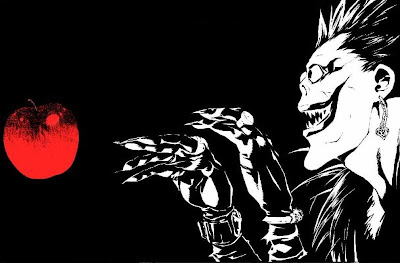 The BGM and the Title song was perfect and complemented the visuals well. Over all Death Note is a short and sweet, twisty amazing anime, that no anime fans should miss.

Some of my favourite quotes from Death Note (listing out only a few, as I forgot many):

and the epic one:
I want to tell you, I am L
Some Hilarious Dialogues:
Light: What was it?
L: Matsuda’s acting stupid again.
Light: Well, that is his speciality.
Matsuda: I can hear you, you know…

Matsuda: I wonder, is it about ten million dollars?
Ryuk: How many apples could I buy with that?

Matsuda: Ryuuzaki, is there anything else I can do to help? Besides the manager job?
L: You want to be useful?
Matsuda: Yes!
L: Then go get me some coffee.