4 Mins read
9
0
Share
2 days back our beloved Tamil Nadu Weatherman made a post in his Facebook page. The gist of the post is `Climate Change is a Myth`. I decided long back not to put any meaningful time on Climate Change for sometime and focus on what I do right now, which is GrassrotosApp.

But as a hyper active Climate Change believer (after putting meaningful time on reading Science journals), I couldn’t ignore this. I wanted to engage in a genuine discussion and posted this comment yesterday.

Hi. 15,364 scientists from 184 countries signed a letter to Humanity about the threat to the Planet’s life system, caused by Climate change. They mention about 6th mass extinction and many more things.
Link: https://academic.oup.com/bioscience/article/67/12/1026/4605229Would like to know your thoughts on this?

I didnt get any response from him yet. But another guy, named Vijay Raj, who also seems to be a Climate Change Deiner, posted a detailed comment, stating several facts on why Climage Change is a Hoax. His exact comment:

I know your question is addressed to our beloved Weatherman. But if I may use this opportunity to test if their claims are true

(Here is a Copy+Paste of a few facts)
1. Global supplies of clean water have increased. In 1990, 76% of the world’s population had reasonable access to drinking water. By 2010 that had increased to 89%, according to a report from the Food and Agricultural Organization at the U.N.
2. The per-capita supply of fish worldwide climbed roughly 30% over those years.
3. World hunger and poverty have dropped dramatically. The share of the global population that is undernourished declined more than 40% between 1990 and 2015, U.N. data show. The share of the global population living in abject poverty went down by more than 35%.
4. Land has gotten far more productive, not less. In fact, the share of land devoted to agriculture hasn’t budged since 1990, according to the U.N. report. Think about that for a minute: We are able to feed 34% more people, and feed them better than ever, using the same amount of land!
5. In the U.S. at least, air pollution is down since 1992 for every single pollutant the EPA measures. And USA CO2 emissions are down since the mid-1990s, thanks not to government regulations, but because of the fracking innovation. (Fracking currently opposed in India, especially Tamil Nadu)
6. That massive deforestation predicted by scientists? The amount of forest land in the world declined by just 3% from 1990 to 2010, the U.N. report says. (In the U.S., it’s increased.)

7. Agricultural production has hit record high! Including India – where crop production is continuously increasing because of high carbon and favourable weather.
These are some of the positive points. Of course, there are many negatives. But I don’t think we are headed for collapse! We are stable for now. India has to address pollution and corruption in the coming decades to be really upto western standard of living. And it will happen.

For which I replied

Hi Vijay Raj,
Thanks for the details comment. Appreciate it. My thoughts below:
1. First of all, I am no Scientist, Subject matter expert in Environment, Climate or anything related to it. I am a Software Engineer by skill, recently attempting my best at Entrepreneurship, which is highly driven by Climate Change (as I understand it)
2. So I rely on Science papers, Documentary movies that refer Scientific publication to get a understanding on what’s happening around. Even in those papers, I dont have the capacity to understand completely. But I can just read the Abstract and get a gist of it.
3. And No. I dont rely on Media to understand things. I know how crap Media is. More than that I have personal, first hand experiences of the BS Media is. Whatever news I read in Media, I try to see If there is any actual Journal/Science Paper published.
4. I very recently started bookmarking all Climate Change Science publications in this link:https://papaly.com/saiy2k/aUsxG/Research-Papers-on-CC More general Climate change news @https://papaly.com/saiy2k/5HCKb/Climate-Change
5. If you or anyone here could refer any Science articles / journals on Climage Change is Hoax, it would be great. If you get get a `Paper` link to back each of your point, that would be awesome.
6. If u think, relying on `Science paper` published by Scientists, Professors in well known Universities, Research institutes is a bad idea, Let me know where can I find more reliable information?I am open to any change in method, strategy. The ultimate aim is to uncover truth.Looking forward for a happy discussion.

I was not even trying to prove my points or deny his points. All I was trying is to establish a process of discussion to find the Truth, in the scenario where we claim opposite versions of truth. But I was `Marked as Spam` in 1 minute after I made my comment.

Tamil Nadu Weatherman May I know, why my comment is marked as Spam? If there is any specific genuince reason, let me know. I ll try and correct it. I am open to criticism.
I am just looking for a constructive discussion to find the better version of Truth. If u believe you words are Absolute truth and there is no further discussion needed, then good luck. I guess I am at a absolutely wrong place in pursuit of Truth!

Screenshots. In case the comments are deleted. 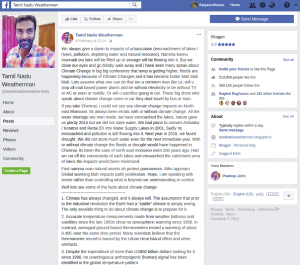 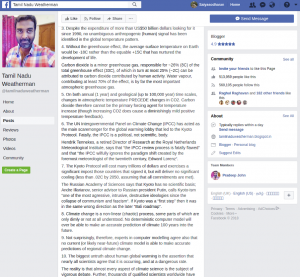 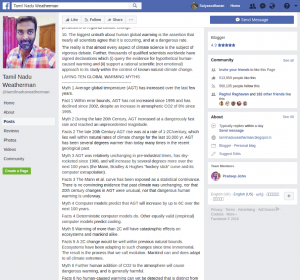 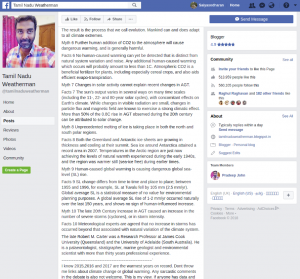 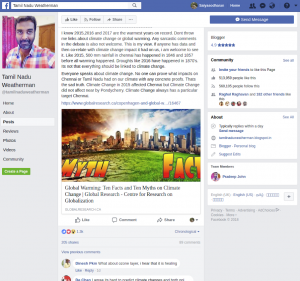 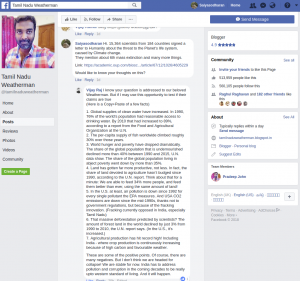 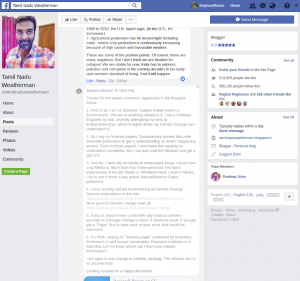 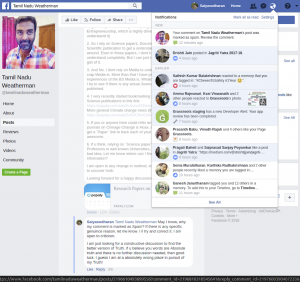