Cycling with a Stranger at midnight

I was en route to my Uncle’s home near Avadi in my Cycle. Time is around 11.30 PM. Very much tired from the busy day, which started with Swimming (practise) in early morning with Vivek Ramaraj and ended with Sapling Distribution in a Reception near Porur with Surya, Lakshmanan, Anand Kumar (Green Warriors of Chennai Social Service), Karan and Radhika (New Joins in CSS, working in L & T). Because of both my Cycle condition and my Body condition, I was riding at what I consider as medium Pace.

I was cycling in Avadi – Poonamallee High road all alone. There were few vehicles passing now and then. In a distant, I could saw a lonely Pedestrian walking by slowly in the left side of the road. As I pedalled slowly, I am nearing him. In a couple of minutes, I crossed him when he called me, “thambi…” (brother).
I stopped and replied, “yes, tell…” 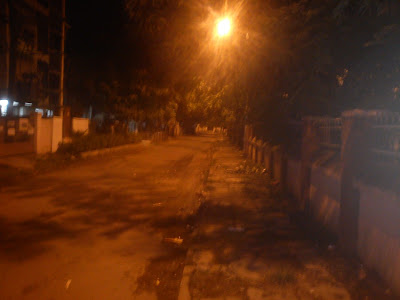 Ride with a Stranger and My crazy thoughts

Stranger: “Have you seen any hotels while on the way?”
“hmmmm…. No, All shops were closed as its already 11.30 PM”
“oh… !!!”, he told and stood still.
I wanted to help him, though I was wondering If its fine to help him, he being a total stranger and keeping in mind, the time. But then I asked “Are you hungry?”
“yes bro. Came to Chennai for some work. Got too late, missed Dinner and now here I am, searching for food in mid – night”
Without thinking I told, “fine. Join me. I will be going forward few kilometres. May be we could find some hotel. But only If you could ride, since I am little tired to take on doubles.”
He was so happy and took my Cycle and started pedalling. I sat in the back. Then only I started asking myself, “What I am doing? I should havn’t done this. What if he going to beat me up and take my belongings? What if his gang is waiting some 100 metres front, waiting for the pray? What if he a Gay rapist? (We live in `India`) What if… What if…”
I got seriously tensed, solely based on my imagination, took up my phone, typed in 100, but didn’t dial, though I am ready to dial anytime, if things go wrong.
Made a plan in mind itself. He is a heavy build, Can crush me very easily, but I believe I have more Stamina and can run away easily and also call 100 and request for help. Then, I was running a simulation inside my mind on the execution of plan, when he interrupted, “Where you going at this time, brother?”
“I am going to my Uncle’s home. We might have travelled more half a km, but no shops. I guess we couldn’t find any at this time.” (Hoping he will stop and go back in his way)
“yeah Possibly, Lets see..”, he didn’t care and kept pedalling.
I was saying to myself, “Curse me, I should never have stopped in the first place” and to him, “Brother, We came little far, How can you go back then, it might be hard” (with the full intention of convincing him to stop cycle and go back).
“No problem brother. If we find a hotel, I can eat and stay there itself. I will get a bus in morning to go back.”
“okay.” Then both of us were completely silent for few minutes, I am in high alert mode, prepared to run and dial 100 anytime.
He again broke the silence, “I think we came too far, no hotels unfortunately. There is a shed there. I will just go there and sleep. Thanks for the ride.”
I got very much relieved, but felt very shameful over my totally insane thoughts of such a kind person. Then, I said, “ok. Take care” and left

I was then introspecting the whole incident, the insecure feeling that I had over a fellow citizen, mainly because of the night time. I had discussions with such strangers at even later times. But never had a ride together and one another difference is, during previous encounters, I would have a maximum of Rs. 100 and a Basic phone. But this time, I had around Rs. 3000 in pocket and a Smart phone, which is why I worried more.
Still, I don’t know whether to change myself and be a better human next time, or avoid strangers at such times. Because I can’t be sure if he is one among the majority or he is one among the Exceptions.
Share